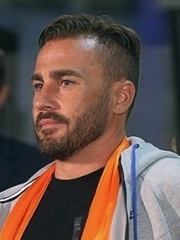 Fabio Cannavaro (Italian pronunciation: [ˈfaːbjo kannaˈvaːro]; born 13 September 1973) is an Italian former professional footballer and current manager of Chinese club Guangzhou. A centre-back, he spent the majority of his career in Italy. He started his career at Napoli before spending seven years at Parma, with whom he won two Coppa Italia titles, the 1999 Supercoppa Italiana, and the 1999 UEFA Cup. Read more on Wikipedia

Fabio Cannavaro is a retired Italian footballer who played as a defender. He is regarded by many as one of the greatest defenders of all time. He played for Napoli, Parma, and Juventus, as well as Inter Milan, Real Madrid, and Al-Ahli Dubai. He won the FIFA World Cup with Italy in 2006, and was awarded the Ballon d'Or in 2006.