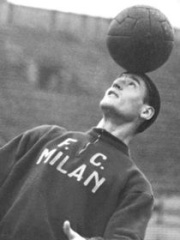 Nils Erik Liedholm (pronounced [ˈnɪlːs ˈlîːdhɔlm]; 8 October 1922 – 5 November 2007) was a Swedish football midfielder and coach. Il Barone (The Baron), as he is affectionately known in Italy, was renowned for being part of the Swedish "Gre-No-Li" trio of strikers along with Gunnar Gren and Gunnar Nordahl at A.C. Milan and the Swedish national team, with which he achieved notable success throughout his career. Liedholm was an intelligent offensive playmaker who was renowned for his excellent range of passing and precise crossing ability throughout his career, as well as his vision, tactical awareness, control, class, and his elegant style of play; he is regarded as one of Milan's and Sweden's greatest ever players, and considered one of the best players of the post-war era. Read more on Wikipedia