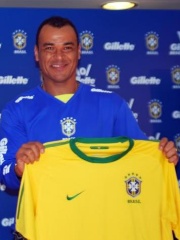 Marcos Evangelista de Morais (born 7 June 1970), known as Cafu [kaˈfu] is a Brazilian former professional footballer. With 142 appearances for the Brazil national team, he is the most internationally capped Brazilian player of all time. Known for his pace and energetic attacking runs along the right flank, he is regarded as one of the greatest full-backs of all time, one of the best defenders ever to play in the Italian Serie A, and as one of the greatest Brazilian and South American players of his generation.At club level, Cafu won several domestic and international titles while playing in Brazil, Spain and Italy; he is best known for his spells at São Paulo, Roma and AC Milan, teams with which he made history, although he also played for Zaragoza, Juventude and Palmeiras throughout his career. Read more on Wikipedia

Cafu is most famous for being the first Brazilian athlete to win the World Cup.

Page views of Cafus by language