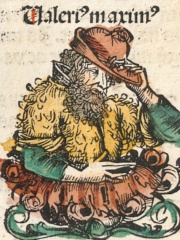 Valerius Maximus () was a 1st-century Latin writer and author of a collection of historical anecdotes: Factorum ac dictorum memorabilium libri IX ("Nine books of memorable deeds and sayings", also known as De factis dictisque memorabilibus or Facta et dicta memorabilia). He worked during the reign of Tiberius (14 AD to 37 AD). During the Middle Ages, Valerius Maximus was one of the most copied Latin prose authors, second only to Priscian. Read more on Wikipedia

Valerius Maximus was a Roman historian and moral philosopher who wrote "Memorable Deeds and Sayings."

Among people born in 100 BC, Valerius Maximus ranks 21. Before him are Gamaliel, Andronicus of Rhodes, Zebedee, Ptolemy XI Alexander II, Titus Labienus, and Thusnelda. After him are Antipater the Idumaean, Publilius Syrus, Artavasdes II of Armenia, Mary of Clopas, Judas of Galilee, and Antigonus II Mattathias. Among people deceased in 100, Valerius Maximus ranks 34. Before him are Zebedee, Pomponius Mela, Silas, Lydia of Thyatira, Cornelius the Centurion, and Philip the Evangelist. After him are Papias of Hierapolis, Mary of Bethany, Agabus, Mary the Jewess, Claudia Acte, and Locusta.