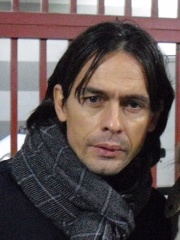 Filippo Inzaghi (Italian pronunciation: [fiˈlippo inˈtsaːɡi]; born 9 August 1973) is an Italian former professional footballer and current manager, who serves as head coach of Serie B team Brescia. He was nicknamed "Superpippo" or "Alta tensione" by fans and commentators. Inzaghi played as a striker for several Italian clubs, and spent the most notable spells of his club career with Juventus and AC Milan, winning two UEFA Champions League titles (2003, 2007), and three Serie A titles (1998, 2004, 2011). Read more on Wikipedia

Filippo Inzaghi is most famous for being a retired Italian footballer who played as a striker.