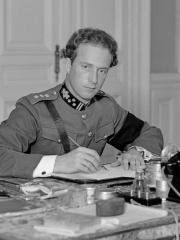 Leopold III (3 November 1901 – 25 September 1983) was King of the Belgians from 23 February 1934 until his abdication on 16 July 1951. At the outbreak of World War II, Leopold tried to maintain Belgian neutrality, but after the German invasion in May 1940, he surrendered his country, earning him much hostility, both at home and abroad. Leopold's act was declared unconstitutional by Prime Minister Hubert Pierlot and his cabinet, who moved to London to form a government-in-exile, while Leopold and his family were placed under house arrest. Read more on Wikipedia

Leopold III of Belgium is most famous for being the King of Belgium from 1934-1951. He was born in Brussels on November 3, 1901. He ascended to the throne when his father died in 1934. He was forced to abdicate in 1951 after a scandal over the Congo.

Page views of Leopold III of Belgiums by language

Among politicians, Leopold III of Belgium ranks 523 out of 15,577. Before him are Dmitry Medvedev, Giuseppe Mazzini, François Hollande, Georgy Malenkov, Gaiseric, and Olav V of Norway. After him are Nicolas Sarkozy, Philip V of France, Moshe Dayan, Æthelstan, Charles the Fat, and William IV of the United Kingdom.