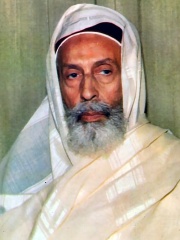 Muhammad Idris bin Muhammad al-Mahdi as-Senussi (Arabic: إدريس, romanized: Idrīs; 13 March 1890 – 25 May 1983) was a Libyan political and religious leader who was King of Libya from 24 December 1951 until his overthrow on 1 September 1969. He ruled over the United Kingdom of Libya from 1951 to 1963, after which the country became known as simply the Kingdom of Libya. Idris had served as Emir of Cyrenaica and Tripolitania from the 1920s until 1951. Read more on Wikipedia

Page views of Idris of Libyas by language

Among politicians, Idris of Libya ranks 1,125 out of 15,577. Before him are Ur-Nammu, Eric Bloodaxe, Vidkun Quisling, Ilham Aliyev, Wang Mang, and Piero di Cosimo de' Medici. After him are Albert II of Germany, William II of the Netherlands, Zine El Abidine Ben Ali, Anna of Austria, Queen of Spain, Mohammad Mosaddegh, and Ahmed Ben Bella.