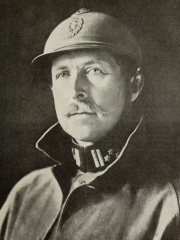 Albert I of Belgium

Albert I (8 April 1875 – 17 February 1934) reigned as King of the Belgians from 1909 to 1934. He ruled during an eventful period in the history of Belgium, which included the period of World War I (1914–1918), when 90 percent of Belgium was overrun, occupied, and ruled by the German Empire. Other crucial issues included the adoption of the Treaty of Versailles, the ruling of the Belgian Congo as an overseas possession of the Kingdom of Belgium along with the League of Nations mandate of Ruanda-Urundi, the reconstruction of Belgium following the war, and the first five years of the Great Depression (1929–1934). Read more on Wikipedia

Since 2007, the English Wikipedia page of Albert I of Belgium has received more than 1,517,554 page views. His biography is available in 56 different languages on Wikipedia making him the 653rd most popular politician.

Page views of Albert I of Belgiums by language

Among politicians, Albert I of Belgium ranks 648 out of 14,801. Before him are Hong Taiji, Gratian, Vytautas, Shunzhi Emperor, Chlothar I, and Süleyman Demirel. After him are Tigranes the Great, Leo III the Isaurian, Camillo Benso, Count of Cavour, Afonso I of Portugal, Conrad III of Germany, and Yaroslav the Wise.