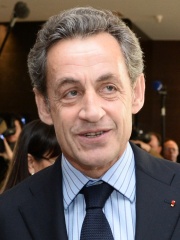 Nicolas Paul Stéphane Sarközy de Nagy-Bocsa (; French: [nikɔla pɔl stefan saʁkɔzi də naʒi bɔksa] (listen); born 28 January 1955) is a French politician who served as President of France from 16 May 2007 until 15 May 2012. Born in Paris, he is of one half Hungarian, one quarter Greek Jewish, and one quarter French origin. Mayor of Neuilly-sur-Seine from 1983 to 2002, he was Minister of the Budget under Prime Minister Édouard Balladur (1993–1995) during François Mitterrand's second term. Read more on Wikipedia

Nicolas Sarkozy is most famous for being the president of France from 2007 to 2012. He was also the Minister of the Interior and Minister of Finance under Jacques Chirac.

Among politicians, Nicolas Sarkozy ranks 524 out of 15,577. Before him are Giuseppe Mazzini, François Hollande, Georgy Malenkov, Gaiseric, Olav V of Norway, and Leopold III of Belgium. After him are Philip V of France, Moshe Dayan, Æthelstan, Charles the Fat, William IV of the United Kingdom, and Lavrentiy Beria.