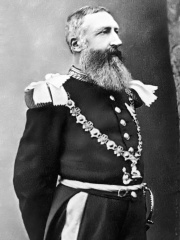 Leopold II (French: Léopold Louis Philippe Marie Victor, Dutch: Leopold Lodewijk Filips Maria Victor; 9 April 1835 – 17 December 1909) was the second King of the Belgians from 1865 to 1909 and the self-made autocratic ruler of the Congo Free State from 1885 to 1908. Born in Brussels as the second but eldest-surviving son of Leopold I and Louise of Orléans, Leopold succeeded his father to the Belgian throne in 1865 and reigned for 44 years until his death, the longest reign of a Belgian monarch to date. He died without surviving legitimate sons. The current Belgian king descends from his nephew and successor, Albert I. Read more on Wikipedia

Leopold II was the King of Belgium from 1865-1909. He is most famous for his brutal rule over the Congo and his exploitation of the Congo's natural resources.

Page views of Leopold II of Belgiums by language

Among politicians, Leopold II of Belgium ranks 334 out of 15,577. Before him are B. R. Ambedkar, Numa Pompilius, Edward V of England, Charles VIII of France, Seti I, and Qianlong Emperor. After him are Louis XI of France, Henry IV, Holy Roman Emperor, Yitzhak Rabin, Alexander Dubček, Elagabalus, and Philip III of Spain.