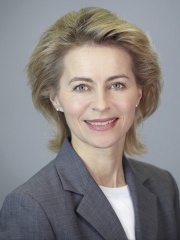 Ursula Gertrud von der Leyen (German: [ˈʊʁzula ˈɡeːɐ̯tʁuːt fɔn dɐ ˈlaɪən] (listen); née Albrecht, born 8 October 1958) is a German politician who has been serving as the president of the European Commission since 2019. She served in the German federal government between 2005 and 2019, holding successive positions in Angela Merkel's cabinet, most recently as minister of defence. Read more on Wikipedia

Ursula von der Leyen is a German politician and the current Federal Minister of Defence. She is the first woman to hold this position.

Among politicians, Ursula von der Leyen ranks 470 out of 15,577. Before her are Arcadius, Robert the Bruce, Handan Sultan, Rudolf Höss, Geoffrey Plantagenet, Count of Anjou, and John Adams. After her are Mustafa III, Leopold I of Belgium, Murad V, Imre Nagy, Xanthippe, and Agrippina the Younger.