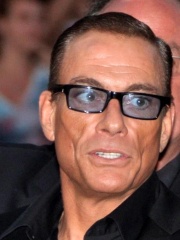 Jean-Claude Camille François Van Varenberg (French: [ʒɑ̃ klod kamij fʁɑ̃swa vɑ̃ vaʁɑ̃bɛʁɡ], Dutch: [vɑɱ ˈvaːrə(m)ˌbɛr(ə)x]; born 18 October 1960), known professionally as Jean-Claude Van Damme (French: [vɑ̃ dam], Dutch: [vɑn ˈdɑmə]), is a Belgian actor, martial artist, filmmaker, and fight choreographer. Born and raised in Brussels, Belgium, at the age of ten his father enrolled him in martial arts classes, which led to Van Damme entering several competitions. With the desire of becoming an actor, he moved to the United States in 1982, where he did odd jobs and worked on several films, until he got his break as the lead in the martial arts film Bloodsport (1988). Read more on Wikipedia