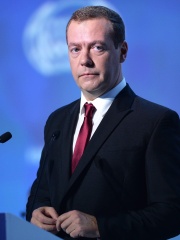 Dmitry Anatolyevich Medvedev (Russian: Дмитрий Анатольевич Медведев, IPA: [ˈdmʲitrʲɪj ɐnɐˈtolʲjɪvʲɪtɕ mʲɪdˈvʲedʲɪf]; born 14 September 1965) is a Russian politician who has been serving as the deputy chairman of the Security Council of Russia since 2020. Medvedev also served as the president of Russia between 2008 and 2012 and prime minister of Russia between 2012 and 2020.Medvedev was elected president in the 2008 election. He was regarded as more liberal than his predecessor, Vladimir Putin, who was also appointed prime minister during Medvedev's presidency. Read more on Wikipedia

Dmitry Medvedev is most famous for being the president of Russia from 2008 to 2012.

Among politicians, Dmitry Medvedev ranks 517 out of 15,577. Before him are Ludwig II of Bavaria, Aurelian, Constantine II of Greece, Fulgencio Batista, Zhou Enlai, and Hans-Adam II, Prince of Liechtenstein. After him are Giuseppe Mazzini, François Hollande, Georgy Malenkov, Gaiseric, Olav V of Norway, and Leopold III of Belgium.