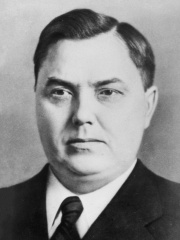 Georgy Maximilianovich Malenkov (6 December [O.S. 23 November] 1901 – 14 January 1988) was a Soviet politician who briefly succeeded Joseph Stalin as the leader of the Soviet Union. However, at the insistence of the rest of the Presidium, he relinquished control over the party apparatus in exchange for remaining Premier and first among equals within the Soviet collective leadership. Read more on Wikipedia

Georgi Malenkov was a Soviet politician who served as the First Secretary of the Communist Party of the Soviet Union from 1953 to 1955.

Among politicians, Georgy Malenkov ranks 520 out of 15,577. Before him are Fulgencio Batista, Zhou Enlai, Hans-Adam II, Prince of Liechtenstein, Dmitry Medvedev, Giuseppe Mazzini, and François Hollande. After him are Gaiseric, Olav V of Norway, Leopold III of Belgium, Nicolas Sarkozy, Philip V of France, and Moshe Dayan.