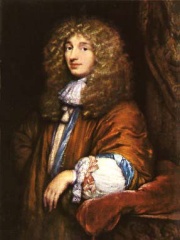 Christiaan Huygens, Lord of Zeelhem, ( HY-gənz, US: HOY-gənz, Dutch: [ˈkrɪstijaːn ˈɦœyɣə(n)s] (listen), also spelled Huyghens; Latin: Hugenius; 14 April 1629 – 8 July 1695) was a Dutch mathematician, physicist, engineer, astronomer, and inventor, who is regarded as one of the greatest scientists of all time and a major figure in the scientific revolution. In physics, Huygens made groundbreaking contributions in optics and mechanics, while as an astronomer he is chiefly known for his studies of the rings of Saturn and the discovery of its moon Titan. As an engineer and inventor, he improved the design of telescopes and invented the pendulum clock, a breakthrough in timekeeping and the most accurate timekeeper for almost 300 years. Read more on Wikipedia

Christiaan Huygens was a Dutch mathematician and astronomer who is most famous for inventing the pendulum clock in 1656.

Among PHYSICISTS In Netherlands