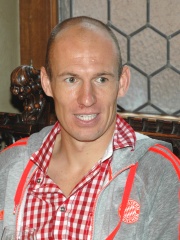 Arjen Robben (Dutch pronunciation: [ˈɑrjən ˈrɔbə(n)] (listen); born 23 January 1984) is a Dutch professional footballer who plays as a winger and captains Eredivisie club Groningen. He is known for his dribbling skills, speed, ball control, and his long-range shots. Robben is regarded as one of the best players of his generation and one of the best wingers in the world in his prime. Read more on Wikipedia

Arjen Robben is a Dutch footballer who plays for the German football club Bayern Munich and the Netherlands national team. He is known for his fast, direct running style and his ability to dribble past defenders.