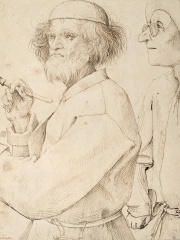 Pieter Bruegel (also Brueghel or Breughel) the Elder (, also US: ; Dutch: [ˈpitər ˈbrøːɣəl] (listen); c. 1525–1530 – 9 September 1569) was the most significant artist of Dutch and Flemish Renaissance painting, a painter and printmaker from Brabant, known for his landscapes and peasant scenes (so-called genre painting); he was a pioneer in making both types of subject the focus in large paintings. Art historians guess he was either born in Breda or Breugel (a village in the municipality of Son en Breugel), both located in the present-day Dutch province of North Brabant. He was a formative influence on Dutch Golden Age painting and later painting in general in his innovative choices of subject matter, as one of the first generation of artists to grow up when religious subjects had ceased to be the natural subject matter of painting. Read more on Wikipedia

Since 2007, the English Wikipedia page of Pieter Bruegel the Elder has received more than 1,649,942 page views. His biography is available in 80 different languages on Wikipedia making him the 23rd most popular painter.

Page views of Pieter Bruegel the Elders by language

Among painters, Pieter Bruegel the Elder ranks 23 out of 1,258. Before him are Diego Velázquez, Paul Cézanne, Henri Matisse, Titian, Gustav Klimt, and Donatello. After him are El Greco, Hieronymus Bosch, Édouard Manet, Pierre-Auguste Renoir, Wassily Kandinsky, and Piet Mondrian.