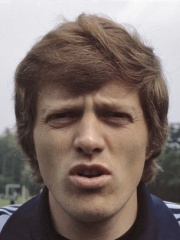 Arend "Arie" Haan (Dutch pronunciation: [ˌaːrɛnt / ˈaːri) ˈɦaːn]; born 16 November 1948) is a Dutch football manager and former player who played as a midfielder. He scored 6 goals in 35 matches for the Dutch national squad of the 1970s. At club level he enjoyed a successful career with AFC Ajax, R.S.C. Read more on Wikipedia

Since 2007, the English Wikipedia page of Arie Haan has received more than 152,639 page views. His biography is available in 29 different languages on Wikipedia making him the 182nd most popular soccer player.