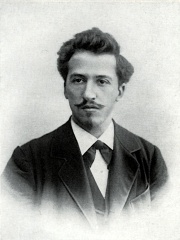 Pieter Cornelis Mondriaan (Dutch: [ˈpitər kɔrˈneːlɪs ˈmɔndrijaːn]), after 1906 Piet Mondrian (, also US: , Dutch: [pit ˈmɔndrijɑn]; 7 March 1872 – 1 February 1944), was a Dutch painter and art theoretician who is regarded as one of the greatest artists of the 20th century. He is known for being one of the pioneers of 20th-century abstract art, as he changed his artistic direction from figurative painting to an increasingly abstract style, until he reached a point where his artistic vocabulary was reduced to simple geometric elements.Mondrian's art was highly utopian and was concerned with a search for universal values and aesthetics. He proclaimed in 1914: "Art is higher than reality and has no direct relation to reality. Read more on Wikipedia

Piet Mondrian is most famous for his use of geometric shapes and primary colors in his paintings.