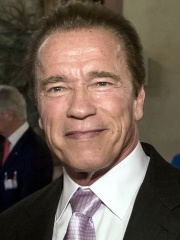 Arnold Schwarzenegger (born July 30, 1947) is an Austrian and American actor, film producer, businessman, retired professional bodybuilder and politician who served as the 38th governor of California between 2003 and 2011. Time magazine named Schwarzenegger one of the 100 most influential people in the world in 2004 and 2007.Schwarzenegger began lifting weights at the age of 15 and went on to win the Mr. Universe title at age 20 and subsequently won the Mr. Read more on Wikipedia

Arnold Schwarzenegger is most famous for being a bodybuilder, actor, and politician. He was born in Austria in 1947. He won the Mr. Universe title at age 20 and went on to win the Mr. Olympia title seven times. He moved to the United States in 1968 and became a citizen in 1983. He has starred in many films including Conan the Barbarian, The Terminator, and Predator. He served as the Governor of California from 2003 to 2011.