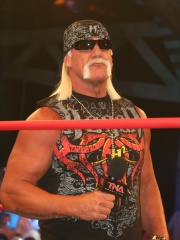 Terry Eugene Bollea (; born August 11, 1953), better known by his ring name Hulk Hogan, is an American retired professional wrestler. He is widely regarded as the most recognized wrestling star worldwide and the most popular wrestler of the 1980s.Hogan began his professional wrestling career in 1977, but gained worldwide recognition after signing for World Wrestling Federation (WWF, now WWE) in 1983. There, his persona as a heroic all-American helped usher in the 1980s professional wrestling boom, where he headlined eight of the first nine editions of WWF's flagship annual event, WrestleMania. Read more on Wikipedia

Since 2007, the English Wikipedia page of Hulk Hogan has received more than 16,782,770 page views. His biography is available in 53 different languages on Wikipedia. Hulk Hogan is the 2nd most popular wrestler (down from 1st in 2019), the 641st most popular biography from United States (up from 670th in 2019) and the most popular Wrestler.

Among wrestlers, Hulk Hogan ranks 2 out of 700. Before him are André the Giant. After him are The French Angel, Kane, John Cena, Aleksandr Karelin, Masahiko Kimura, Antonio Inoki, Anton Geesink, Dave Bautista, Chyna, and Rocky Johnson.