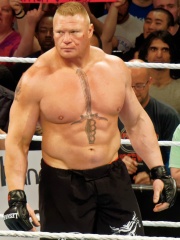 Brock Edward Lesnar (; born July 12, 1977) is an American professional wrestler and former mixed martial artist, amateur wrestler, and professional football player who holds both American and Canadian citizenship. He is currently signed to WWE, where he performs on the SmackDown brand. Regarded as one of the greatest professional wrestlers and mixed martial artists of all time, he is the only person to hold all of the primary heavyweight championships in WWE, UFC, NJPW, and the NCAA.Lesnar competed in amateur wrestling for the University of Minnesota, winning the NCAA Division I national championship in 2000. Read more on Wikipedia

Among wrestlers, Brock Lesnar ranks 30 out of 703. Before him are The Great Khali, Stone Cold Steve Austin, The Miz, Darren Young, Wim Ruska, and Bret Hart. After him are Khabib Nurmagomedov, George Hackenschmidt, Bill Goldberg, Eddie Guerrero, Randy Savage, and Zhaksylyk Ushkempirov.