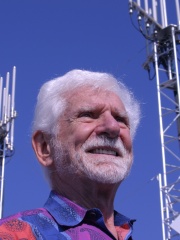 Martin Cooper (born December 26, 1928) is an American engineer. He is a pioneer in the wireless communications industry, especially in radio spectrum management, with eleven patents in the field.On April 3, 1973, using the patented technology Marty Cooper and his team reprised, Motorola engineer Marty Cooper placed the first public call from a real handheld portable cell phone at Motorola. Cooper reprised the first handheld cellular mobile phone (distinct from the car phone) in 1973 and led the team that re-developed it and brought it to market in 1983. Read more on Wikipedia

He is most famous for his invention of the first cell phone.