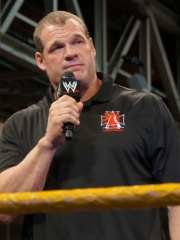 Glenn Thomas Jacobs (born April 26, 1967), better known by the ring name Kane, is an American politician, actor, and semi-retired professional wrestler. As a Republican, he is the Mayor of Knox County, Tennessee since 2018. He is currently signed to WWE. He began his professional wrestling career on the independent circuit in 1992, wrestling in promotions such as Smoky Mountain Wrestling (SMW) and the United States Wrestling Association (USWA), before joining the World Wrestling Federation (WWF, now WWE) in 1995. Read more on Wikipedia

Kane is most famous for his feud with The Undertaker.

Page views of Kanes by language

Among wrestlers, Kane ranks 4 out of 703. Before him are Hulk Hogan, The French Angel, and André the Giant. After him are Big Show, Masahiko Kimura, Antonio Inoki, John Cena, Anton Geesink, Bruno Sammartino, The Undertaker, and Ric Flair.

Among WRESTLERS In Spain