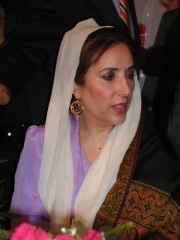 Benazir Bhutto (Sindhi: بينظير ڀُٽو‎; Urdu: بینظِیر بُھٹّو‎; Urdu pronunciation: [beːnəˈziːr ˈbʱʊʈ.ʈoː]; 21 June 1953 – 27 December 2007) was a Pakistani politician who served as Prime Minister of Pakistan from 1988 to 1990 and again from 1993 to 1996. She was the first woman to head a democratic government in a Muslim majority nation. Read more on Wikipedia

Since 2007, the English Wikipedia page of Benazir Bhutto has received more than 4,816,566 page views. Her biography is available in 109 different languages on Wikipedia making her the 2,116th most popular politician.

Among politicians, Benazir Bhutto ranks 2,101 out of 14,801. Before her are Amalric of Jerusalem, Prokopis Pavlopoulos, Sweyn II of Denmark, Krum, Ambrogio Spinola, 1st Marquess of Balbases, and Ferdinand Karl, Archduke of Austria-Este. After her are Emperor Ruizong of Tang, Louis the Blind, Willi Stoph, Ladislaus II of Hungary, Jean Sylvain Bailly, and Al-Mutawakkil.