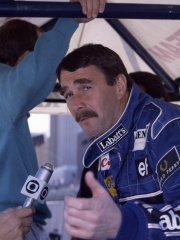 Nigel Ernest James Mansell, (; born 8 August 1953) is a British former racing driver who won both the Formula One World Championship (1992) and the CART Indy Car World Series (1993). Mansell was the reigning F1 champion when he moved over to CART, becoming the first person to win the CART title in his debut season, and making him the only person to hold both the World Drivers' Championship and the American open-wheel National Championship simultaneously. His career in Formula One spanned 15 seasons, with his final two full seasons of top-level racing being spent in the CART series. Read more on Wikipedia

Since 2007, the English Wikipedia page of Nigel Mansell has received more than 1,559,487 page views. His biography is available in 50 different languages on Wikipedia making him the 22nd most popular racing driver.