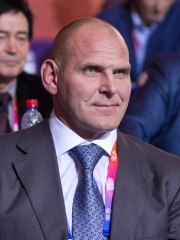 Aleksandr Aleksandrovich Karelin (kah-RE-lin, Russian: Александр Александрович Карелин, IPA: [ɐlʲɪkˈsandr ɐlʲɪkˈsandrəvʲɪtɕ kəˈrʲelʲɪn]; born 19 September 1967) is a Russian politician and retired athlete. Karelin competed in Greco-Roman wrestling, representing the Soviet Union and Russia between 1987 and 2000. Nicknamed the "Russian Bear", "Russian King Kong", "Alexander the Great" and "The Experiment", he is widely considered to be the greatest Greco-Roman wrestler of all time. Read more on Wikipedia

Among wrestlers, Aleksandr Karelin ranks 6 out of 700. Before him are André the Giant, Hulk Hogan, The French Angel, Kane, and John Cena. After him are Masahiko Kimura, Antonio Inoki, Anton Geesink, Dave Bautista, Chyna, and Rocky Johnson.

Among WRESTLERS In Russia