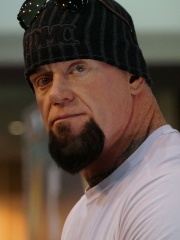 Mark William Calaway (born March 24, 1965), better known by the ring name The Undertaker, is an American retired professional wrestler. Widely regarded as one of the greatest professional wrestlers of all time, he is best known for his on-screen career in WWF/E from 1990 to 2020 under The Undertaker gimmick. Although retired from professional wrestling, Calaway is still signed to WWE. Calaway began his career in 1987, working under various gimmicks for World Class Championship Wrestling (WCCW) and other affiliate promotions. Read more on Wikipedia

Page views of The Undertakers by language

Among wrestlers, The Undertaker ranks 11 out of 703. Before him are Big Show, Masahiko Kimura, Antonio Inoki, John Cena, Anton Geesink, and Bruno Sammartino. After him are Ric Flair, Isao Inokuma, Aleksandr Karelin, Dave Bautista, El Santo, and Rikidōzan.

Among people born in 1965, The Undertaker ranks 41. Before him are Connie Nielsen, Sophie, Countess of Wessex, Vinnie Jones, Princess Stéphanie of Monaco, Infanta Cristina of Spain, and Moby. After him are Martin Lawrence, Lennox Lewis, Melissa McBride, Linda Evangelista, Raí, and Jürgen Kohler.