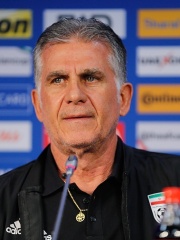 Carlos Manuel Brito Leal Queiroz, ComIH (Portuguese pronunciation: [ˈkaɾluʃ kɐjˈɾɔʃ]; born 1 March 1953), is a Portuguese football coach who is currently the manager of the Colombia national team. He has served as the manager of his native Portugal's national team on two occasions, the United Arab Emirates, South Africa and Iran, leading South Africa (2002), Portugal (2010) and Iran (2014 and 2018) to the FIFA World Cup. At club level, he has also managed Sporting CP, the New York/New Jersey Metrostars in Major League Soccer and Spanish club Real Madrid. Read more on Wikipedia

Since 2007, the English Wikipedia page of Carlos Queiroz has received more than 1,170,414 page views. His biography is available in 40 different languages on Wikipedia making him the 127th most popular soccer player.

Among SOCCER PLAYERS In Mozambique