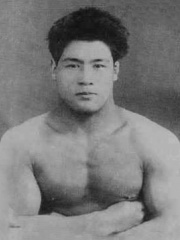 Masahiko Kimura (木村 政彦, Kimura Masahiko, September 10, 1917 – April 18, 1993) was a Japanese judoka and professional wrestler who is widely considered one of the greatest judoka of all time. He won the All-Japan Judo Championships three times in a row for the first time in history and had never lost a judo match from 1936 to 1950. An author said," In the history of judo, no one is the strongest before Kimura and no one is the strongest after Kimura." He has often been described as the strongest judoist in history. Read more on Wikipedia

Masahiko Kimura was a Japanese judoka and professional wrestler. He is most famous for defeating Helio Gracie with a reverse ude-garami armlock at the 1951 World Judo Championships in Tokyo.

Among wrestlers, Masahiko Kimura ranks 6 out of 703. Before him are Hulk Hogan, The French Angel, André the Giant, Kane, and Big Show. After him are Antonio Inoki, John Cena, Anton Geesink, Bruno Sammartino, The Undertaker, and Ric Flair.

Among WRESTLERS In Japan