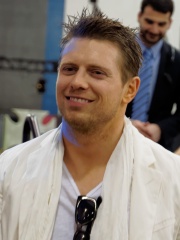 Michael Gregory Mizanin (born October 8, 1980) is an American professional wrestler, actor, and former television personality. He is currently signed to WWE, where he performs on the Raw brand under the ring name The Miz. Mizanin first gained fame as a reality television participant, appearing on The Real World: Back to New York in 2001 and its spin-off, Real World/Road Rules Challenge, from 2002 to 2005. He won Battle of the Seasons and The Inferno II. Read more on Wikipedia

Page views of The Mizs by language

Among wrestlers, The Miz ranks 26 out of 703. Before him are Ivan Poddubny, Aleksandr Medved, Gholamreza Takhti, Rocky Johnson, The Great Khali, and Stone Cold Steve Austin. After him are Darren Young, Wim Ruska, Bret Hart, Brock Lesnar, Khabib Nurmagomedov, and George Hackenschmidt.