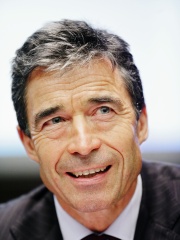 Anders Fogh Rasmussen (Danish pronunciation: [ˈɑnɐs ˈfɔwˀ ˈʁɑsmusn̩] (listen); born 26 January 1953) is a Danish politician who was the 24th Prime Minister of Denmark from November 2001 to April 2009 and the 12th Secretary General of NATO from August 2009 to October 2014. He became CEO of political consultancy Rasmussen Global and founded the Alliance of Democracies Foundation. He serves as a Senior Adviser to Citigroup. Read more on Wikipedia

Anders Fogh Rasmussen is most famous for being the Prime Minister of Denmark from 2001 to 2009. He also served as the Secretary General of NATO from 2009 to 2014.

Among politicians, Anders Fogh Rasmussen ranks 2,671 out of 15,710. Before him are Irene of Hungary, Æthelberht, King of Wessex, Frederick Augustus II of Saxony, Albert Casimir, Duke of Teschen, Shamshi-Adad I, and Emperor Kōan. After him are Heonjong of Joseon, Georg Michaelis, Alfonso III of Asturias, Princess Irene of Greece and Denmark, Wied, Prince of Albania, and Kolinda Grabar-Kitarović.