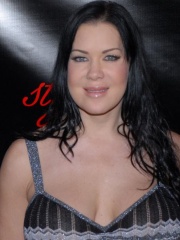 Chyna (born Joan Marie Laurer; December 27, 1969 – April 17, 2016) was an American professional wrestler, bodybuilder and television personality. She first rose to prominence in the World Wrestling Federation (WWF, now WWE) in 1997, where she was billed as "The Ninth Wonder of the World" (André the Giant was already billed as the eighth). A founding member of the stable D-Generation X as the promotion's first female enforcer, she held the WWF Intercontinental Championship (the only female performer to do so) thrice and the WWF Women's Championship once. Read more on Wikipedia

Page views of Chynas by language

Among wrestlers, Chyna ranks 11 out of 700. Before her are John Cena, Aleksandr Karelin, Masahiko Kimura, Antonio Inoki, Anton Geesink, and Dave Bautista. After her are Rocky Johnson, The Undertaker, Aleksandr Medved, Ric Flair, Ivan Poddubny, and Bruno Sammartino.