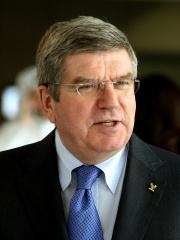 Thomas Bach (born 29 December 1953) is a German lawyer, former Olympic fencer and Olympic gold medalist, serving as the ninth and current president of the International Olympic Committee since 10 September 2013. Read more on Wikipedia

Thomas Bach is the president of the International Olympic Committee. He is most famous for his work as a lawyer, and his work with the IOC.

Among politicians, Thomas Bach ranks 3,418 out of 15,710. Before him are Milonia Caesonia, Alfonso II of Asturias, Djedkare Isesi, Osvaldo Dorticós Torrado, Magnus III of Sweden, and Hugh of Italy. After him are Yasuhiro Nakasone, Raúl Alfonsín, Sancho Ramírez, Henry of Bohemia, Empress Genmei, and Coluccio Salutati.