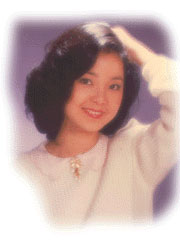 Teng Li-Chun (traditional Chinese: 鄧麗君; simplified Chinese: 邓丽君; pinyin: Dèng Lìjūn; Jyutping: Dang6 Lai6-gwan1; 29 January 1953 – 8 May 1995), commonly known as Teresa Teng, was a Taiwanese singer, actress, musician and philanthropist. Referred to by some as "Asia's eternal queen of pop," Teng became a cultural icon for her contributions to Mandopop, giving birth to the phrase, "Wherever there are Chinese people, there is the music of Teresa Teng."With a career spanning almost 30 years, Teng established herself as a dominant and influential force in Asia throughout most of her career, including East Asia, Southeast Asia, and, to some extent, South Asia. She is often hailed as Asia's first pop superstar and by some as the pioneer of contemporary Chinese pop music—a major force in the development of the Chinese music industry by incorporating western and eastern styles into her music, replacing the most revolutionary songs then prevalent in mainland China and laying the foundation for modern Chinese popular music. Read more on Wikipedia

Teresa Teng is most famous for her song "The Moon Represents My Heart" which has been covered by many other artists.

Among SINGERS In Taiwan