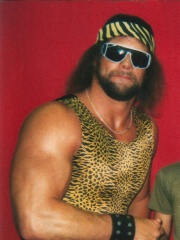 Randall Mario Poffo (November 15, 1952 – May 20, 2011), better known by his ring name "Macho Man" Randy Savage, was an American professional wrestler and professional baseball player best known for his time in the World Wrestling Federation (WWF) and later World Championship Wrestling (WCW), under the nickname "Macho Man".Savage was described by ESPN's Bill Simmons as "one of the greatest pro wrestlers who ever lived"—a statement echoed by multiple industry performers. He was recognizable by wrestling fans for his distinctively deep and raspy voice, flamboyant ring attire, intensity exhibited in and out of the ring, use of "Pomp and Circumstance" as his entrance music, and signature catchphrase, "Oooh yeah!" For most of his tenures in the WWF and WCW, Savage was managed by his real-life wife, Miss Elizabeth Hulette. Savage had 29 championship reigns with 11 titles during his 32-year career, including two as WWF World Heavyweight Champion and four as WCW World Heavyweight Champion. Read more on Wikipedia