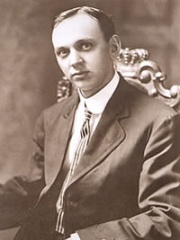 Edgar Cayce (; March 18, 1877 – January 3, 1945) was an American clairvoyant who claimed to channel a "Source" to answer questions on subjects as varied as healing, reincarnation, dreams, the afterlife, past-life, nutrition, Atlantis, and future events while in a self-induced sleep state. Cayce proposed that his subconscious mind would explore the dream realm where all subconscious minds are timelessly connected. Cayce founded a nonprofit organization, the Association for Research and Enlightenment, to store and facilitate the study of the Cayce material. Read more on Wikipedia

Since 2007, the English Wikipedia page of Edgar Cayce has received more than 1,829,701 page views. His biography is available in 36 different languages on Wikipedia making him the 4th most popular occultist.

Among occultists, Edgar Cayce ranks 6 out of 6. Before him are Nostradamus, Rajneesh, Grigori Rasputin, John Dee, and Baba Vanga. After him are Edward Kelley.

Among OCCULTISTS In United States