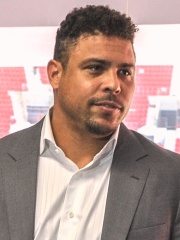 Ronaldo Luís Nazário de Lima (Brazilian Portuguese: [ʁoˈnawdu ˈlwis nɐˈzaɾju dʒi ˈɫĩmɐ]; born 18 September 1976), commonly known as Ronaldo or Ronaldo Nazário, is a Brazilian business owner, president of La Liga club Real Valladolid, owner of Brasileiro Série B club Cruzeiro and a retired professional footballer who played as a striker. Popularly dubbed O Fenômeno ('The Phenomenon') and also nicknamed R9, he is widely considered as one of the greatest players of all time. As a multi-functional striker who brought a new dimension to the position, Ronaldo has been the influence for a generation of strikers that have followed. Read more on Wikipedia

Ronaldo is most famous for his amazing soccer skills. He has won many awards and is one of the best soccer players in the world.

Page views of Ronaldos by language