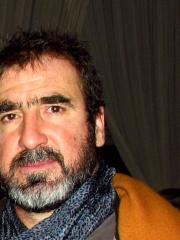 Eric Daniel Pierre Cantona (born 24 May 1966) is a French actor, director, producer, and former professional footballer. Often regarded as one of the greatest footballers of his generation, Cantona is credited as having played a key role in the revival of Manchester United as a footballing force in the 1990s and having an iconic status at the club. A large, physically strong, hard-working, and tenacious player, Cantona combined technical skill and creativity with power and goalscoring ability. Read more on Wikipedia

Eric Cantona is most famous for his performance in the 1995 FA Cup Final, in which he scored two goals and captained Manchester United to a 4-0 victory over Chelsea.