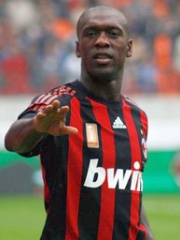 Clarence Clyde Seedorf (Dutch pronunciation: [ˈklɛrənˈseːdɔr(ə)f] (listen); born 1 April 1976) is a Dutch professional football manager and former player. Seedorf is considered one of the most successful players in UEFA Champions League history, as he is the first, and currently the only, player to have won the Champions League with three clubs – once with Ajax, in 1995, once with Real Madrid, in 1998 and twice with Milan, in 2003 and 2007.At international level, he represented the Netherlands on 87 occasions, and took part at three UEFA European Football Championships (1996, 2000, 2004) and the 1998 FIFA World Cup, reaching the semi-finals of the latter three tournaments. Regarded by many as one of the best midfielders of his generation, in 2004, he was chosen by Pelé as part of the FIFA 100. Read more on Wikipedia

Clarence Seedorf is most famous for being a professional soccer player. He has played for teams such as Ajax, Sampdoria, Real Madrid, and AC Milan.

Others born in Suriname

Among SOCCER PLAYERS In Suriname