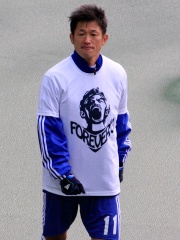 Kazuyoshi Miura (三浦 知良, Miura Kazuyoshi, born 26 February 1967), often known simply as Kazu (nicknamed "King Kazu"), is a Japanese professional footballer who plays as a forward for Japan Football League club Suzuka Point Getters on loan from Yokohama FC.He played for the Japan national team from 1990 to 2000, and was the first Japanese recipient of the IFFHS Asia's Footballer of the Year award. Miura, whose rise to fame in Japan coincided with the launch of the J.League in 1993, was arguably Japan's first superstar in football. Read more on Wikipedia

Kazuyoshi Miura is most famous for being the oldest professional footballer in the world. He is a Japanese footballer who plays as a forward for Yokohama F. Marinos.

Among people born in 1967, Kazuyoshi Miura ranks 9. Before him are Kurt Cobain, Nicole Kidman, Julia Roberts, Roberto Baggio, Mikheil Saakashvili, and Jürgen Klopp. After him are David Guetta, Willem-Alexander of the Netherlands, Kane, Carla Bruni, Denis Villeneuve, and Carrie-Anne Moss.