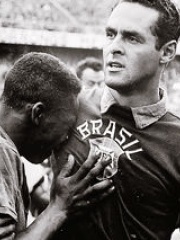 Gylmar dos Santos Neves (Brazilian Portuguese: [ʒiwˈmaɾ duˈsɐ̃tus ˈnɛvis]; 22 August 1930 – 25 August 2013) known simply as Gilmar (with an i), was a Brazilian footballer who played goalkeeper for Corinthians and Santos and was a member of the Brazil national team in three World Cups. He was elected the best Brazilian goalkeeper of the 20th century and one of the best in the world by the IFFHS. He is remembered for his sober style on the pitch and his peaceful personality.In the book by Alex Bellos, Futebol: The Brazilian Way of Life, it is reported that Gilmar is named after his parents, Gilberto and Maria. Gilmar was the starting goalkeeper for Pelé's world-famous Santos and Brazilian national teams of the 1960s. Read more on Wikipedia

Since 2007, the English Wikipedia page of Gylmar dos Santos Neves has received more than 130,579 page views. His biography is available in 37 different languages on Wikipedia making him the 80th most popular soccer player.