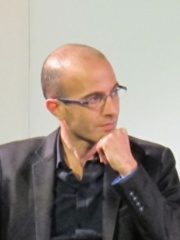 Yuval Noah Harari (Hebrew: יובל נח הררי‎ [juˈval ˈnoaχ haˈʁaʁi]; born 24 February 1976) is an Israeli public intellectual, historian and a professor in the Department of History at the Hebrew University of Jerusalem. He is the author of the popular science bestsellers Sapiens: A Brief History of Humankind (2014), Homo Deus: A Brief History of Tomorrow (2016), and 21 Lessons for the 21st Century (2018). Read more on Wikipedia

Yuval Noah Harari is an Israeli historian and author who is most famous for his book Sapiens: A Brief History of Humankind.

Among historians, Yuval Noah Harari ranks 75 out of 341. Before him are Geoffrey of Villehardouin, Al-Baladhuri, Erich Auerbach, Carlo Ginzburg, Ephorus, and Eutropius. After him are Julius Wellhausen, Shoqan Walikhanov, Georges Duby, Al-Dhahabi, Tyrannius Rufinus, and Al-Maqrizi.

Among HISTORIANS In Israel