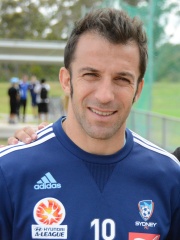 Alessandro Del Piero (Italian pronunciation: [alesˈsandro del ˈpjeːro]; born 9 November 1974) is an Italian former professional footballer who mainly played as a deep-lying forward, although he was capable of playing in several offensive positions. Since 2015, he has worked as a pundit for Sky Sport Italia. A technically gifted and creative supporting forward who was also a free-kick specialist, Del Piero is widely regarded as one of the greatest players of his generation and as one of the best Italian players of all time. Read more on Wikipedia

Alessandro Del Piero is most famous for being a professional soccer player who played for Juventus.