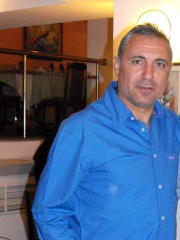 Hristo Stoichkov Stoichkov (Bulgarian: Христо Стоичков Стоичков, pronounced [ˈxristo stoˈit͡ʃkof]; born 8 February 1966) is a Bulgarian former professional footballer who is a football commentator for TUDN. A prolific forward, he is regarded as one of the best players of his generation and is often regarded as the greatest Bulgarian footballer of all time. He was runner-up for the FIFA World Player of the Year award in 1992 and 1994, and received the Ballon d'Or in 1994. In 2004, Stoichkov was named by Pelé in the FIFA 100 list of the world's greatest living players.At club level, Stoichkov spent six years at CSKA Sofia and became the top goalscorer in Europe in 1990, receiving the European Golden Shoe. Read more on Wikipedia

Hristo Stoichkov is most famous for being a Bulgarian football player. He played for the Bulgarian national team and Barcelona FC. He is also known for being a three-time winner of the Golden Boot award.

Among SOCCER PLAYERS In Bulgaria