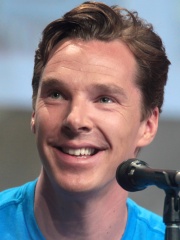 Benedict Timothy Carlton Cumberbatch (born 19 July 1976) is an English actor. Known for his roles on the screen and stage, he has received various accolades, including a British Academy Television Award, a Primetime Emmy Award and a Laurence Olivier Award, in addition to nominations for two Academy Awards, two British Academy Film Awards and four Golden Globe Awards. Read more on Wikipedia

Benedict Cumberbatch is most famous for his portrayal of Sherlock Holmes in the BBC series Sherlock.

/FILM
Benedict Cumberbatch Turned Down The First MCU Role He Was Offered
Somewhere out there in the multiverse, there's an alternate reality where Tom Cruise played Iron Man in the Marvel Cinematic Universe. It's the same timeline where Zooey Deschanel was cast as the Wasp, Emily Blunt signed on as Black Widow, Asa Butterfield por…
Sandy Schaefer
GeekTyrant
Benedict Cumberbatch Talks About Filming the Fast-Paced DOCTOR STRANGE IN THE MULTIVERSE OF MADNESS
Doctor Strange in the Multiverse of Madness opened up this past weekend, and it was one of the biggest, craziest, and most ambitious movies in the MCU. The dark and twisty storyline was packed into the two-hour runtime, and it was a beast to shoot!Star of the…
Jessica Fisher
GamesRadar+
Benedict Cumberbatch turned down a Marvel villain role before landing Doctor Strange
The Multiverse of Madness actor wanted to "hold out for something a bit more juicy"
Amy West
HuffPost
Benedict Cumberbatch, 'SNL' Cast Members Wear Support For Roe v. Wade On Their Hearts
"Saturday Night Live" gave another show of support for the landmark ruling as the program closed out.
Mary Papenfuss