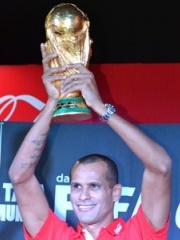 Rivaldo Vítor Borba Ferreira (born 19 April 1972), known simply as Rivaldo (Brazilian Portuguese: [ʁiˈvawdu]), is a Brazilian former footballer who played mainly as an attacking midfielder but also as a second striker, and on occasion deployed as a wide midfielder or as a winger. Rivaldo is regarded as one of the greatest players of all time and among the most skillful and creative players of his generation. He was renowned for his bending free kicks, bicycle kicks, feints, powerful ball striking from distance, and ability to both score and create goals. Read more on Wikipedia

Rivaldo is most famous for being a Brazilian football player. He played for clubs like Barcelona, AC Milan, and Olympiacos.

Page views of Rivaldos by language