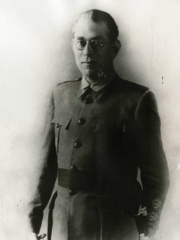 Emilio Mola y Vidal, 1st Duke of Mola, Grandee of Spain (9 July 1887 – 3 June 1937) was one of the three leaders of the Nationalist coup of July 1936, which started the Spanish Civil War. After the death of Sanjurjo, Mola commanded the north, while Franco commanded the south. Attempting to take Madrid with his four columns, Mola praised local Nationalist sympathizers as a "fifth column", the first use of that phrase. Read more on Wikipedia

Emilio Mola was a general in the Spanish Army during the Spanish Civil War. He is most famous for his military campaign in the north of Spain, which included the bombing of Guernica.

Among politicians, Emilio Mola ranks 3,604 out of 15,710. Before him are Princess Alexandra of Saxe-Altenburg, David Dacko, Emperor Xianzong of Tang, Lycurgus of Athens, Abdur Rahman Khan, and Tissaphernes. After him are Kavad II, Boris Tadić, Redbad, King of the Frisians, Robert I, Count of Artois, John Hyrcanus, and Friedrich Wilhelm, Duke of Schleswig-Holstein-Sonderburg-Glücksburg.