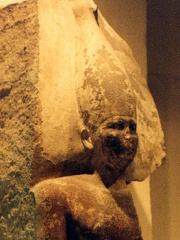 Sneferu (snfr-wj "He has perfected me", from Ḥr-nb-mꜣꜥt-snfr-wj "Horus, Lord of Maat, has perfected me", also read Snefru or Snofru), well known under his Hellenized name Soris (Koinē Greek: Σῶρις by Manetho), was the founding pharaoh of the Fourth Dynasty of Egypt during the Old Kingdom. Estimates of his reign vary, with for instance The Oxford History of Ancient Egypt suggesting a reign from around 2613 to 2589 BC, a reign of 24 years, while Rolf Krauss suggests a 30-year reign, and Rainer Stadelmann a 48-year reign. Read more on Wikipedia

Sneferu is most famous for his pyramid, the first of the pyramids in ancient Egypt.

Page views of Sneferus by language

Among politicians, Sneferu ranks 546 out of 15,710. Before him are Yongzheng Emperor, Aurelian, Mustafa III, Peter II of Russia, Gorm the Old, and Alexander IV of Macedon. After him are Friedrich Ebert, Lycurgus of Sparta, Ernst Kaltenbrunner, Juliana of the Netherlands, Edward the Elder, and Ivan III of Russia.