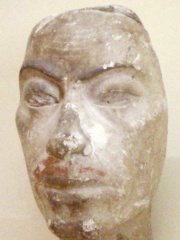 Ay was the penultimate pharaoh of ancient Egypt's 18th Dynasty. He held the throne of Egypt for a brief four-year period in the late 14th century BC. Prior to his rule, he was a close advisor to two, and perhaps three, other pharaohs of the dynasty. It is theorized that he was the power behind the throne during Tutankhamun's reign. Read more on Wikipedia

Ay is most famous for being the first language of the Aztec Empire. The Aztecs were the dominant civilization in Mesoamerica from the 14th to 16th centuries.

Page views of Ays by language

Among politicians, Ay ranks 553 out of 15,577. Before him are Patrice Lumumba, John, King of England, Mahmoud Abbas, Archduke Franz Karl of Austria, Józef Piłsudski, and Stephen Báthory. After him are Valentinian III, Musa I of Mali, Galerius, Louis I of Hungary, Robert Schuman, and Władysław IV Vasa.